This site may contain affiliate links to products or services we think are awesome. By making purchases through these links, we receive a small commission which helps to pay for this site (and maybe an adult beverage or two).

If you know Konrad, then you know that he has a fascination with ancient cultures and their technology. One of his bucket list sites to visit is Chichén Itzá… and we are now able to cross that one off the list thanks to a day trip to Chichén Itzá and a couple other spectacular places on the Yucatan peninsula.

We woke up early and were picked up at our hotel and taken into Cancun where we met the rest of the tour and hopped on a large tour bus. During the three hour ride to Chichén Itzá our tour guide gave us a lot of information on Mayan history and culture (a lot of which I unfortunately slept through since I didn’t sleep well the night before). We made a pit stop at a roadside market and bought a really cool prosperity statue carved out of obsidian, and a handmade Mayan calendar drawing of our wedding date.

Chichén Itzá itself was amazing. The acoustical knowledge that the Mayans had is jaw dropping. Standing at the base of the main pyramid, the tour guide had us all clap our hands together three times, and the pyramid “squawked” back at us three times… how cool is that?! 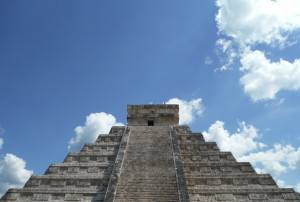 There was also a ball court in which a game called Pok-Ta-Pok was played that would bounce sounds back and forth from one wall to another a total of 7 times. The Mayans did this by carefully aligning the blocks of the walls so that on one wall the blocks went from large to small and on the other wall they were aligned from small to large. The ball court was also designed so that two people standing on opposite sides of the 96.5 meter long field could easily speak to each other with “inside” voices. 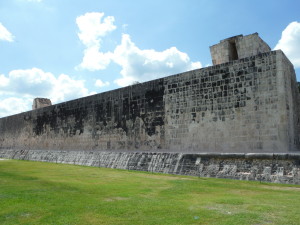 During our walk around the Chichén Itzá complex, we saw stray dogs wandering up and down the steps of various buildings and pyramids. This one we saw in the middle of walkway where all the merchants were selling their souvenirs. 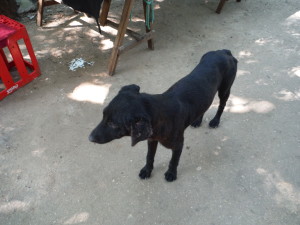 We also took a walk and saw the observatory 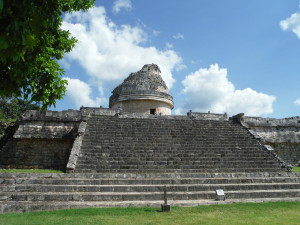 After our tour of Chichén Itzá we got back on the tour bus and drove a little ways to a local restaurant where a buffet lunch was waiting for us. I must be real lucky to have grown up in California because the “real” Mexican food that the tour guide kept talking about was just the the Mexican food I had grown up with :)… which of course is delicious! There was however a bowl of Habanero salsa that was beyond spicy! Apparently they make it extra spicy for tourists. Poor Konrad, who loves all things spicy, put on his normal heaping tablespoons of salsa and was sweating up a storm!

During lunch there were dancers that put on an amazing show for us. At one point they even put serving trays on their heads loaded up with beer bottles and glasses. They were spinning and jumping up and down all while keeping the tray perfectly balanced! 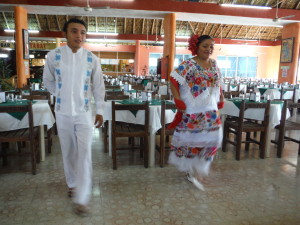 After lunch we drove a little further and stopped at Hubiku cenote. A cenote is an opening or a sinkhole in the limestone ground (which makes up the entire Yucatan peninsula) that exposes an underground river. This particular cenote has several flights of stairs that were dug out to lead down to the river. 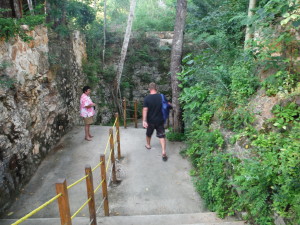 While it was very hot at ground level, within the underground cave it was very cool, and the water even cooler… a lovely 62 degrees. After a very long hot day walking around Chichén Itzá, the water was downright refreshing! 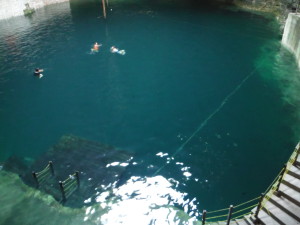 The water was very clear, and it wasn’t long before we noticed that we weren’t the only ones swimming in the river! There were dozens of fish of all sizes swimming along side us! 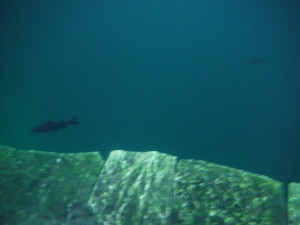 After a bit of swimming, we visited the onsite Tequila Museum which of course offered tastings… which of course we asked for plenty of! We ended up bringing home a bottle of kiwi tequila and coffee tequila. We really loved the chocolate tequila, but they were out :(… perhaps a return trip is in order!